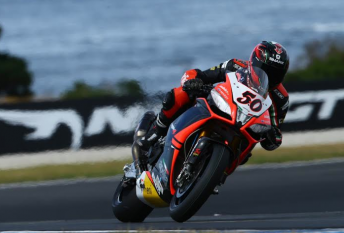 The Frenchman had been fighting in a four rider scrap at the front for the majority of the race before he grabbed the lead with 10 laps remaining.

The Aprilia man looked set for a battle until the chequered flag, but a spectacular engine failure for Laverty curtailed the race seven laps from the end, gifting Guintoli victory.

Guintoli once again led the field at the start of the race but he faced stiff competition for the position in the early stages, with a fast starting Baz and Marco Melandri ready to pounce.

Baz soon leapt into the lead from second which in turn pushed Guintoli down to fourth as both Laverty and Jonathan Rea capitalised. Elsewhere, Melandri ran off the circuit and dropped right down the order.

The Kawasaki man could only hold the lead until Lap 8 wen Laverty stormed through to the front. Meanwhile, Guintoli moved back into third ahead of Sykes as a four rider squabble for the race win developed.

The battle at the front proved to be a fierce one with any slight mistake being punished. Guintoli by now had recovered and his pace allowed him to move into second. He then forced his way through on Laverty to grab the lead with 10 laps to go.

Just three laps later the race was brought to a premature end. While hounding Guintoli for the lead, Laverty’s Suzuki expired dramatically. Luckily both rider and the rest of the field emerged through the drama.

However, officials deemed conditions too dangerous to continue and the race was red flagged. With more than two thirds distance completed, Guintoli was declared the winner from Baz and Sykes.

Ducati’s Davide Giugliano was fourth ahead of Pata Honda dup of Jonathan Rea and Leon Haslam.

Chaz Davies ensured both Ducati’s finished in the top eight in seventh just in front of the recovering Melandri.