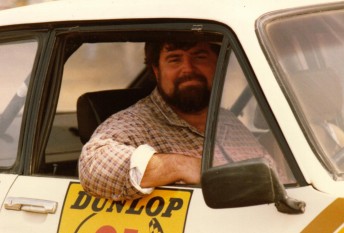 Mike Bell at the wheel of his Escort

One of Australian rallying’s most loved competitors and administrators, Mike Bell, has passed away peacefully in his sleep.

His goal of lifting the level of professionalism brought better events and took rallying to the forefront of motor sports in Australia.

Bell was truly a gentle giant, firstly behind the wheel of a Mitsubishi Lancer in the late 1970s and then Ford Escorts. He took the NSW Clubman series in 1979 in an ex Colin Bond 2-Litre Escort, then in 1981 he purchased the ex Greg Carr RS1800 after the Ford team was disbanded. He won the Autosport Stages rally in Victoria and the Sprintmaster rally in Armidale (NSW). The likes of Bond and Carr were masters of the Escort, but Bell kept the RS1800 in lights in the early 1980s.

“Few will forget the epic Battle between Bell and Bond in the Dunlop 2GO rally, both within seconds of each other on stages, enthralling the 60,000 + crowd at the rally, the action stage by stage playing out on radio 2GO by Craig Denyer. Denyer built a level of excitement between Bell and Bond that was amazing to hear. It was the “local” against Bond in another Escort, making for great radio with the crowds loving it,” said Dogger in his dedication to Bell. 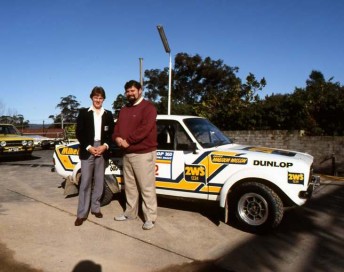 Bell (right) with Malcolm Wilson in 1982

Bell’s attention then switched to getting the best driver he could in the car. In 1982 he called on a young English driver; none other than Malcolm Wilson, who still today is at the forefront of Ford’s World Rally Championship activities.

Bell went on to run the 2GO before establishing himself as the boss of the Rally of Canberra, including elevating it to Asia Pacific Rally Championship status. He quickly gained the reputation as the ‘Go to’ man of rallying, organising other rallies and acting as a CAMS official plus Competitor Relations Officer on a multitude of events.

He looked at ways of getting rallying in the media and always knew he had a spectacular product. Bell worked with local television networks to ensure advertising, news coverage and even extended highlights and dedicated programs on his events. The 2GO and Canberra events were featured as specials on Nine’s Wide World of Sport.

Bell’s passion for the sport went from all levels and his guidance to drivers, administrators and volunteers kept the sport of rallying well and truly alive. If it was a Mike Bell event, then competitors were always comfortable in the knowledge that it would be a well-run event and safety was always paramount.

“Mike Bell was certainly a leader in our sport of rallying, not only as a competitor, but as an official and a top bloke. He spent a lot of his own money on events, personally staking events like the Esanda and the Great Lakes Rally,” said Dogger. “His commitment to rally safety was unquestioned, his concerns for the future of our sport often a worry for him. His legacy is a safer sport and one that runs on time. He rarely, if ever had a rally under his watch run late. Many will miss him and he was highly respected worldwide for his rally skills. He cannot be replaced; we have lost a true champion.”

Speedcafe.com passes on its deepest condolences to Bell’s wife Sarah and family plus his countless friends in rallying.