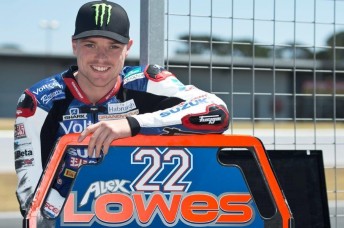 Suzuki rookie Alex Lowes will head into this afternoon’s final battle for grid positions at the Phillip Island World Superbike season opener full of confidence after turning the fastest lap across the three timed practice sessions.

A number of riders made attempts to knock him off the top perch, but the Briton wouldn’t have any of it as he completed the practice sessions with a best lap of 1min30.566sec – but then did some of his good work undone with a crash at turn 11.

Meanwhile, Australia’s Glenn Allerton (1:31.962) was in top form, and finished practice as the second fastest EVO rider on the BMW he only rode for the first time yesterday.

There will be a fourth ‘untimed’ practice session at 12:30pm, before Superpole qualifying begins at 3pm. In the revised Superpole structure, which mirrors the same system used in MotoGP, the top 20 times across the first three practice sessions will take part.

The top 10 fastest riders will be seeded directly into Superpole 2, while the riders classified from 11-20 will take part in Superpole 1. The fastest two riders in Superpole 1 will progress to Superpole 2, making a total of 12 riders competing for the first 12 grid positions.