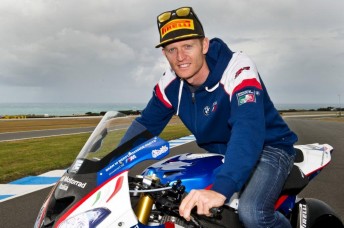 Glenn Allerton ready for the World Superbikes at Phillip Island

Sydney speedster Glenn Allerton will be the Aussie to watch when the opening round of the 2014 Superbike World Championship begins at Phillip Island today with two 45-minute practice sessions.

Allerton is an 11th hour inclusion in the 25-rider pack, deputising for injured international Sylvain Barrier after the Frenchman crashed in a test session on Monday and broke his pelvis. Allerton competed as a wildcard in the 2013 world superbike round at Phillip Island and finished with respectable 14-12 results in the two 22-lap races.

British rider Tom Sykes will begin his defence of the title on the factory Kawasaki, but it will be a massive undertaking against stars like Marco Melandri (Aprilia), Eugene Laverty (Suzuki), Jonathan Rea (Honda), Leon Haslam (Honda) and Chaz Davies (Ducati), and impressive newcomers including 2013 British superbike champion Alex Lowes (Suzuki).

There are also two additional manufacturers on the grid at Phillip Island: legendary Italian marque MV Agusta, which will field ex-MotoGP rider Claudio Corti; and Erik Buell Racing, the first American brand to contest the world superbike title since its inception in 1988. Americans Geoff May and Aaron Yates will be the EBR riders.

Sykes was fastest in the final pre-season test at Phillip Island earlier this week, ahead of Laverty and Lowes.

Final qualifying will be held on Saturday for both classes, and on Sunday world supersport will be decided over one 18-lap race, and the world superbikes will compete in two 22-lap races.