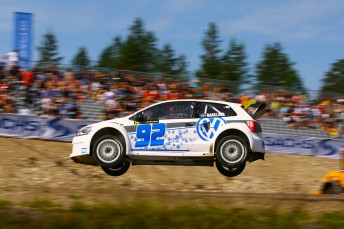 Volkswagen have become the third manufacturer to commit to the newly formed FIA World Rallycross Championship joining Ford and Peugeot in its inaugural year.

The Finn and teammate Anton Marklund will line-up in their new Marklund Motorsport Volkswagen Polo RX Supercars at round one of the World Rallycross Championship in Portugal on 03 May.

“Rallycross is attracting ever-increasing levels of attention in Europe and overseas and is one of the fastest growing motorsport disciplines out there,” said Volkswagen Motorsport Director Jost Capito.

“The races are short and sweet, the cars are spectacular and look almost like factory models. Marklund Motorsport ranks among the most ambitious independent teams and has single-handedly developed the Polo for the 2014 FIA RallyCross World Championship.”

“With Peugeot Sport and Ford Racing both pledging their support to World RX over the past month, it’s excellent news that Volkswagen Motorsport has partnered with Marklund Motorsport and the Polo RX Supercars will also be unleashed on the 2014 grid.”

The inaugural Australian Rallycross Championship was held at the Tailem Bend circuit on 24 June 1979 and was won by Larry Perkins, driving a 2.0-litre Volkswagen Beetle for Kruger Motors.