The 26-year-old moves into the Ford Performance Racing-built Falcon that last year won the Adelaide round in the hands of Chaz Mostert, before being raced by Steve Owen for the remainder of the season.

Although both parties are hopeful of completing the season, the deal is currently for Adelaide only, with Simpson set to race the full Kumho V8 Touring Car Series with Sonic Motor Racing Services.

Simpson finished second in last year’s Kumho Series standings having won nine consecutive races after joining the championship at Round 3.

The Sydneysider had his first taste of MWM’s Dunlop Series machinery at Winton on Monday, where he took part in a two-car test alongside team-mates Andre Heimgartner and Morgan Haber.

The Adelaide entry marks a return of the #27 plate to MW Motorsport after being used in the series by Casey Stoner last year.

“This is a great opportunity for me to feel out what the Dunlop Series is like to run in,” said Simpson of Adelaide.

“It’ll be my first time in Adelaide and jumping over from the Triple Eight to the FPR car is certainly an adjustment, so it’ll be a good challenge.

“I’d be happy if I can crack a top 10 result against the field that’s there and the experience of some of the guys.”

Unlike many of his rivals in Adelaide, Simpson says he’s not chasing a progression to the V8 Supercars Championship and will instead continue to balance racing with his involvement in the family Parramatta Smash Repairs business.

“If you’re going to make the main game you’ve got to be 100 percent involved in it, otherwise you won’t get there,” he said. 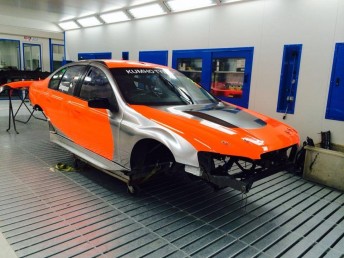 “The Dunlop Series is more just a challenge for myself to see if we can mix it with those guys.

“At the moment I’m not chasing a V8 Supercar career, we’ll just be out there to be amongst it and have some fun.”

Team owner Matthew White, who ironically had been the one to end Simpson’s winning streak in the Kumho Series finale last year, believes that his new driver will acquit himself well in Adelaide.

“I think that Ryan’s talents have been a little bit wasted in the Kumho Series to be honest, he absolutely obliterated it last year,” he said.

“He obviously doesn’t have much experience in these cars but I think he’s going to be a bit of a surprise package in Adelaide.

“He’s got enough general racing experience and ability to know that he’ll have to respect the circuit and work up to it. I think he’s got what it takes to be in the top 10.”

Simpson’s Kumho Series Falcon, meanwhile, will appear in Vodafone colours this season, harking back to its heritage with Craig Lowndes and Triple Eight Race Engineering.

“A lot of guys ran the retro colours last year,” he said.

“It’s a good concept that attracts attention and showcases the history of the cars. We’re looking forward to getting ours out on track.”