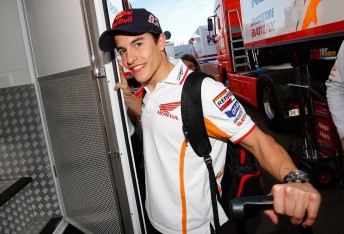 Marc Marquez is expected to miss the Phillip Island test

MotoGP World Champion Marc Marquez has suffered a broken leg while training on a dirt bike in Spain.

Marquez is expected to race at the season opening race in Qatar on 23 March, but the broken right fibula will mean that he will miss the second round of pre-season testing at Sepang next week and is highly doubtful for the Phillip Island test after that.

The accident occurred in Lleida, west of Barcelona and close to Marquez’s home town of Cervera. The motorcycle sensation turned 21 last Monday, was immediately taken to the Quiron Dexeus University Hospital in Barcelona where he was treated by Dr. Xavier Mir for a spiral fracture of the distal third of his right fibula (bone between knee and ankle).

“It was a really unfortunate accident that could happen to anyone at anytime,” said Marquez.

“I was rushed to hospital and Dr. Mir treated me; thankfully there was no ligament damage and it seems like a clean break.”

Dr. Mir confirmed that the break will require a month to heal.

“The results showed no ligament damage or dislocation and no need to proceed with surgery. I expect he will need three to four weeks to fully recover,” said Dr Mir after the CT scan and x-ray.

Marquez has already started rehabilitation with magnetic therapy. He will remain non-weight bearing for two weeks.

For all news in MotoGP in 2014 stay across the BIKES section of Speedcafe.com

Next Story World Superbikes kick off at Phillip Island