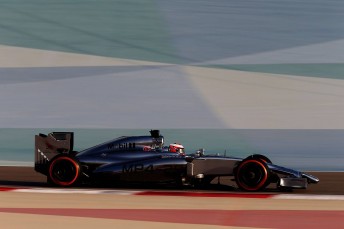 Kevin Magnussen fastest on the second day of testing Bahrain

Rookie Kevin Magnussen’s impressive start to his Formula 1 career continued as he topped the times for McLaren on day two of the pre-season test in Bahrain.

The Dane comfortably sat atop of the time sheets after posting a session best of 1.34.910s on soft tyres, which was 1.5 seconds quicker than Force India’s Nico Hulkenberg.

Fernando Alonso was third for Ferrari just a tenth behind Hulkenberg, while Nico Rosberg, who was halted for two hours with a sensor failure, finished the day in fourth spot for Mercedes.

Although happy with his impressive effort to end the day fastest, Magnussen admitted speed is not imperative to the team this week.

“The team is doing a great job to help me: they’re giving me really good guidance and making me feel confident,” said Magnussen.

“There’s a lot of discussion about laptimes, and it feels good to get some good times recorded, but winter testing is just that – testing. It isn’t about times.

“We’re still learning a lot about the car. We have four more days of testing next week and there’s still a lot of work to do. I’m sure everything up and down the pitlane will change a lot between now and Australia.”

Red Bull Racing finally put their problems behind them and enjoyed a trouble free day as Sebastian Vettel racked up more mileage than the team’s total recorded from last month’s Jerez test.

The reigning champions continue to play catch up to their rivals but Vettel’s 59 laps will be valuable to the team, who ended the day seventh fastest, more than five seconds off Magnusen’s pace. Daniel Ricciardo will step into the RB10 for the remaining two days of the test.

After problems on Wednesday, Williams bounced back with Valtteri Bottas at the wheel. The Finn completed 116 laps, which was the most recorded by any driver, to end the session fifth.

Sauber’s Esteban Gutierrez was ninth ahead of Lotus‘ Romain Grosjean, who could only put 18 laps on board for the Enstone team.