Luff took the N2C-branded Porsche to third in the one-make championship last year and returns with the category’s all-new Type 997 this season.

Founded and managed by team owner Andy McElrea, the N2C ‘No Second Chance’ program sees Luff join guest speakers Paul Stanley and Matt Speakman in a series of high school visits around the country that raise awareness for road safety and the dangers of youth violence.

Stanley’s 15-year-old son was bashed to death at a party eight years ago, while Speakman became a paraplegic after being knocked from his motorcycle by a drunk driver in 1993. 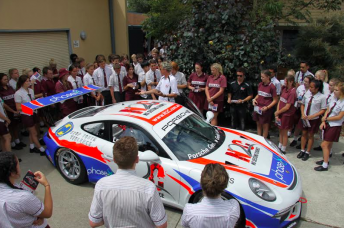 N2C uses motorsport to capture the attention of school students

“It’s fantastic to be part of something that is promoting such important messages to young people,” Luff told Speedcafe.com.

“The reaction that we’re getting at these talks is amazing. When you’ve got Year 10, 11 and 12 guys and girls in tears due to the confronting nature of the stories… you know the message is getting through and that it’s relevant to them.

“Some of the schools we go to are special schools for kids that have come from very tough backgrounds and it’s great to work with them. If you make a difference with one person it’s worthwhile.

“Paul and Matt have very powerful stories to tell, and Matt’s racing works in well with where Andy and I come from.”

McElrea, whose family are long-time friends with the Stanleys, has funded the program to date, but is hopeful of attracting corporate support.

Although Luff will need to end Craig Baird’s streak of three consecutive Carrera Cup titles in order to win the championship this season, the recently confirmed HRT co-driver says he’s not overly focussed on his Kiwi rival.

“As a lot of guys have said, this new car will reset the playing field for all of us and our target is to go out and win races and the championship.

“But there are a lot of other guys we’re going to have to beat in order to do that. There’s no point beating Craig if we’re only fifth.

“We’ve worked incredibly hard over the off-season to improve the way we do things as a team and in the way I operate as well.

“We’re all really looking forward to heading down to Clipsal and getting the season underway.”