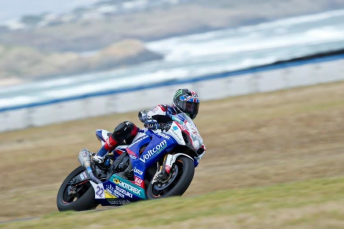 Reigning British Superbike champion Alex Lowes clocked the fastest time in free practice at Phillip Island ahead of this weekend’s opening round of the 2014 World Superbike Championship.

The Englishman, on his debut at the Australian circuit, had no problems adapting to the unique layout as he posted the quickest time of the day with an impressive 1.31.100s effort aboard his Crescent Suzuki.

Aprillia’s Marco Melandri was hot on Lowes heels just 0.0037s adrift of the Brit with Ducati’s Davide Giugliano in third.

Current world champion Tom Sykes, who set the pace in this week’s test, was fourth just two tenths adrift of the pace.

Two practice sessions were held at circuit but rain in the morning session resulted in only a handful of raiders braving the conditions. By the afternoon hit-out the track had dried ensuring a full attendance by the field.

Australian pair Glenn Allerton and Matt Walters, both replacements for injured internationals, were 15th and 22nd respectively on their EVO-spec BMW and Kawasaki machines.

Allerton was impressive as he finished right behind the fastest EVO riders Ducati’s Niccolo Canepa and Kawasaki pair David Salom and Fabien Foret.

Meanwhile, Walters’ performance was encouraging after only learning of his call-up to replace the injured Pedercini Kawasaki rider Luca Scassa, who fractured his pelvis this week, earlier this morning.

There were two massive highside crashes in the session, with Sykes’ teammate Loris Baz coming unstuck at Turn 12, and minutes later Chaz Davies was catapulted over his factory Ducati at Turn 9. Both riders were unhurt.

Ducati’s Davies and Frenchman Sylvain Guintoli rounded out the top 10.

Next Story Alex Lowes maintains the pace at Phillip Island