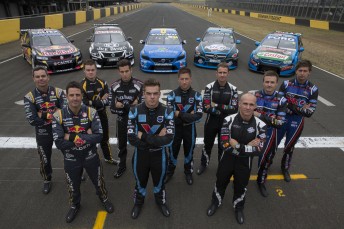 Are you the ultimate V8 Predictor?

The Castrol EDGE V8 Predictor has returned to Speedcafe.com featuring advanced gameplay and greater prizes on offer in 2014.

The winner of this year’s game will select the V8 Supercar round of their choice in 2015 and be treated to a fully funded VIP experience with access to behind the scenes with Castrol-oiled V8 Supercars teams.

There will also be $100 BP Fuel cards and merchandise packs up for grabs for round-by-round winners.

This year’s game features advanced playability with Facebook integration and advanced mobile and tablet optimisation making it easier to play no matter what time of day.

With major upgrades to this year’s game the Castrol EDGE V8 Predictor continues as the number one online fantasy tipping competition of the V8 Supercars Championship.

Additional ‘bonus points’ have also been added to the game in 2014 making it easier for players to catch-up on lost points as the season progresses.

Speedcafe.com will also be on the list of experts as we look to defend the title after winning the inaugural V8 Predictor Expert league in 2013.

The Castrol EDGE V8 Predictor is a perfect way to bond together a group of friends, family, staff or customers using the ‘League’ function within the game.

Entice fellow players to your league by offering up a unique prize for the year or simply play for bragging rights!

The Castrol EDGE V8 Predictor is based on the 2014 V8 Supercar Championship, and is brought to you by the same people that produce the Castrol EDGE Grand Prix Predictor.

The game is free to play and offers you the opportunity to predict the top 10 accumulated points scorers on each race weekend. You can compete against friends, and for prizes, throughout the year.

2013 Castrol EDGE V8 Predictor winner Acc-sell-or-ators will be heading to the Clipsal 500 next week with full VIP treatment for his efforts in taking top honours in last year’s competition.