Ambrose to start seventh at Daytona 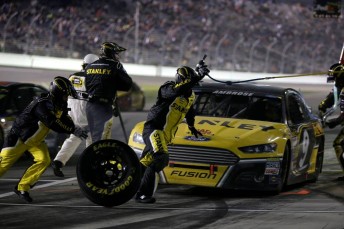 Marcos Ambrose will start Sunday’s Daytona 500 from seventh after a strong performance in his Budweiser Duel qualifying heat.

The Richard Petty Motorsport Ford took the flag fourth in Duel 1 behind Matt Kenseth, Kevin Harvick and Kasey Kahne in a  three-wide finish.

Ambrose was then elevated to third in the results after a suspension irregularity saw Harvick disqualified.

Austin Dillon and Martin Truex Jr had already locked out the front-row courtesy of their qualifying speeds last Sunday.

“That was a better race for us,” said Ambrose afterward.

“We had a rough Unlimited but that car there is a great car for the 500.

“It is straight as could be and we are just going to fluff it and buff it for the next three days to get ready for the 500.”

The second Duel was won by Denny Hamlin and ended with a multi-car wreck on the final corner.

The crash was triggered when Jamie McMurray tagged Jimmie Johnson, whose Hendrick Chevrolet had run out of fuel.

The resulting melee included a flip for Clint Bowyer’s Joe Gibbs Toyota and a hit into the pit wall for Michael Waltrip’s Toyota.

Another to take damage was the Chevrolet of Truex, who will now be among those to start from the rear of the field in a back-up car.

Penske Racing’s Brad Keselowski had led much of Duel 2 before a pit road speeding penalty and a flat tyre put paid to his chances.

Next Story Johnson to team with Wall for Enduro Cup