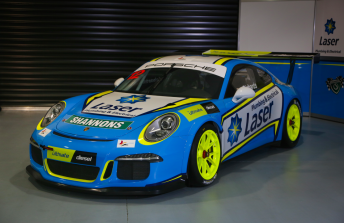 Steven Richards has unveiled a revamped Laser Racing paint scheme ahead of a season that he hopes will net a maiden Carrera Cup Australia title.

Richards is one of a number of drivers hoping to capitalise on the move to a new model Cup Car, the Type 991, and break Craig Baird’s stranglehold on the class.

The Type 991 features a number of distinct changes including a longer wheelbase, paddleshift gearbox and new Cosworth electronics package.

“I’d love to win another Australian championship if it’s possible,” he told Speedcafe.com.

“I think everyone starting off with a new car this year will make the field more even.

“These cars are 100mm longer in the wheelbase than the last cars, which changes the way they handle.

“They are more like a GT car in the way they transition from the entry to the exit of the corner.

“We’ve had some really good young guys coming through in the last couple of years like Shae Davies and Nick Foster,” he added.

“Those guys are out there to prove a point and I’m sure there’ll be some surprises throughout the season.”

Next Story Nissan to demonstrate electric racer in Adelaide