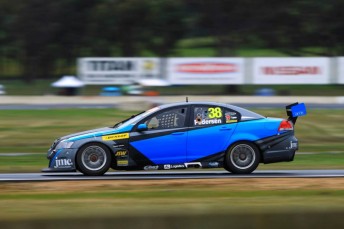 Ant Pedersen in action with Eggleston at Winton last year

The 25-year-old made a single appearance with the team at Winton last year, adding to his previous experience in the series with MW Motorsport in 2010.

Pedersen has been one of the stars of the V8 SuperTourer Series in his native New Zealand, narrowly missing out on last year’s title to Greg Murphy.

“I ran with Eggleston Motorsport last year at the Winton round and was impressed by the teams professionalism and supportive atmosphere so to be able to do a deal to run with them for the full DVS season is fantastic,” he said.

“I’m extremely excited to be racing in the Dunlop Series and I don’t underestimate the challenge in front of me this season but the infrastructure and resources available through EMS will give me the best possible chance with what is my first full season racing in Australia.

“I performed well in my first ever outing at the Clipsal 500 back in 2010 so I hope I can go one better, I can’t wait to get the season started!”

Team manager Rachael Wagg said that her team’s relationship with Triple Eight will help Pedersen’s development as a driver.

“To progress in the V8 Supercar ranks Ant needs to be racing in the Dunlop Series with a top level team that has strong alliances with a very successful main series team – and that’s what we have with Triple Eight,” she said.

“Ant is one of the nicest guys you will meet and very much a team player so we are thrilled to have someone like him join our tight knit group.

“We are very confident Ant will open some eyes in 2014 and cannot wait to help him develop as a driver and see him on the podium.”

Next Story Simpson steps into Dunlop Series with MWM