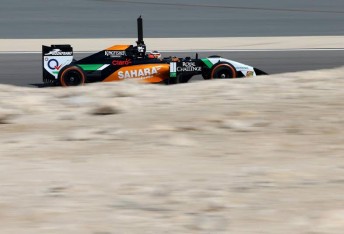 Force India’s Nico Hulkenberg posted the fastest time on the first day of the second pre-season Formula 1 test at Bahrain.

The German was the only man to break into the 1m36 bracket as the Mercedes powered teams continued to dominate the time sheets. Ferraris Fernando Alonso was second fastest but his personal best was almost a second slower than Hulkenberg.

Mercedes‘ Lewis Hamilton was third while McLaren’s Kevin Magnussen, who had topped the morning session, was fourth in another strong outing for the rookie.

However, there were more problems for reining champions Red Bull Racing with Sebastian Vettel completing just 14 laps before the RB10 encountered a new mechanical issue which ended the day prematurely.

The team, which endured a disastrous first test in Jerez, spent the majority of the morning trying to fire up their car as the team continue to work around their pre-season issues.

In the end, Vettel clocked the fifth quickest time of the day but he was a full 3.3 seconds off Hulkenberg’s pace.

“Obviously we’re not happy with where we are now and we have a long way ahead of us,” said Vettel.

“The first gut feeling from the car is OK, but we need more running. It’s not easy to find a quick fix, but I think we understand the problems.

We sorted out the issues from Jerez and we were able to do some laps today. However, very often you fix one problem and another pops up, which is what happened. That’s testing.

“We all knew this year was a massive challenge and we knew it would be difficult. We obviously didn’t want this, but it is what it is and we are working flat out to solve the problems.”

Adrian Sutil in the Sauber was sixth fastest while Renault powered teams Caterham, Toro Rosso and Lotus struggled for speed, consistency and reliability.

Williams’ Felipe Massa and Marussia’s Jules Bianchi completed the results for the day.

See  below for the Day 1 times