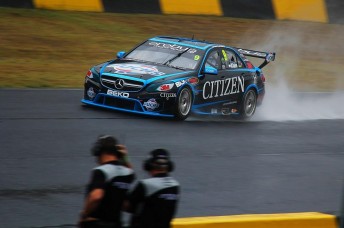 Will Davison had his first taste of the Mercedes in Sydney

Establishing itself as a consistent top 10 performer has been set as the goal for Erebus Motorsport’s second season in the V8 Supercars Championship.

The upcoming Clipsal 500 Adelaide will mark 12 months since the former Stone Brothers Racing Ford squad made its race debut as an Erebus-branded customer Mercedes-AMG outfit.

The opening round proved a baptism of fire in 2013 as the hastily developed package suffered from a range of mainly engine driveability and heat-related issues.

A series of both imported and locally developed upgrades saw the E63s showing flashes of top 10 speed by mid-season, with the run home then including top five finishes at both Sandown and the Gold Coast.

Buoyed by the late-season performance peaks, team manager David Stuart says his squad must focus on consistency, not one-off results.

“We went close to winning at Queensland Raceway last year (where Tim Slade was running second before slipping off the road), but I think what we need to be able to do is first of all be consistent,” he told Speedcafe.com when asked if Erebus can be a winning force this year.

“If we can get that and keep improving our speed throughout the year I’d like to think we’ll be challenging for podiums, but I’m not going to stick my head out and say we’ll win races. 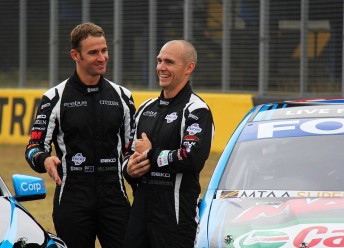 “I think you’ve got to walk before you run and a good weekend for us in Adelaide this time around would be to have two cars in the top 10.

“That would be a really positive start to the year for us.”

The team has this year welcomed former Ford Performance Racing star Will Davison alongside Lee Holdsworth in its trimmed-down two-car line-up.

Davison’s first day in an Erebus Mercedes at last Saturday’s rain-hit Sydney test ended with the former Bathurst winner at the foot of the 25-car time sheets.

Although Davison has been a prolific winner in recent years and finished ‘best of the rest’ behind Red Bull drivers Jamie Whincup and Craig Lowndes in last year’s points standings, Stuart is not concerned by the prospect of having to manage his new driver’s expectations.

“I don’t think it’ll be too hard to keep Will’s expectations in check because he’s doing a pretty good job of that himself,” said Stuart.

“He’s walked into what is a big unknown for him. We know the work that we put in last year and over the summer, but unfortunately he didn’t get to see that maximised at the test day.

“It will take him a while to settle into the car as well. While it’s a Car of the Future, it’s different to what he’s been driving and the way the car reacts to changes will be different. He needs to learn what those changes are doing.”

Davison’s #9 Mercedes featured primary backing from Citizen watches in Sydney while the team continues to search for major partners to adorn its two cars.