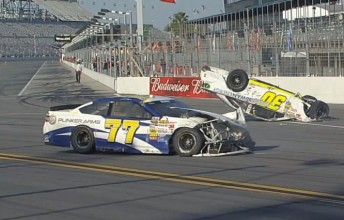 A multicar crash at Daytona International Speedway has seen Parker Kligerman’s car tear away part of the catch fencing and end up on its roof.

Kligerman’s Toyota slid along the top of the SAFER barrier while riding on top of Paul Menard’s Chevrolet. Also involved in the crash was Matt Kenseth, Joey Logano, Dave Blaney, Trevor Bayne and Ryan Truex. All drivers have been checked and released from the track medical centre. No spectators were injured.

The wreck was triggered by Kenseth and Logano coming together.

“I was trying to back out of the draft. We were good, we were going to quit for the day,” Kligerman said.

“I guess the 22 (Logano) was just being overly aggressive. It’s a shame. He’s supposed to be a veteran. You go up to the Sprint Cup Series and it’s supposed to be the best of the best. You’ve got a guy in practice who’s racing people like it’s the end of the Daytona 500.”

Logano gave his description of the accident.

“Maybe I shouldn’t have been racing as hard as I was there in practice, but everybody was in a big pack there trying to make things happen,” said Logano.

“As soon as he (Kenseth) came back up I checked up a little bit and then the 21 (Bayne) hit me from behind and we spun out. It happens. That’s Daytona for you.”

Teams and drivers will look towards running back-up cars, but it almost certainly means the end of the weekend for Blaney who does not have that luxury.

The accident comes almost a year after Kyle Larson’s car went airborne into the same area around the start/finish line catchfence. That accident sent a tyre and debris into the grandstands and injured 12 fans during the Nationwide Series race.

See below for video of the Kligerman crash