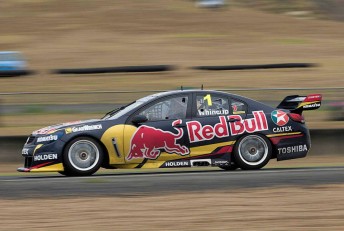 Jamie Whincup is set to ink a single-year extension to his current contract with Triple Eight, triggering speculation about his future beyond 2015.

Such a deal would align Whincup’s commitment to the team with that of team-mate Craig Lowndes and manufacturer Holden.

Whincup has been with the Queensland-based squad since 2006, last signing a three-year deal at the start of the 2012 season.

Speaking to the official V8 Supercars website, Whincup suggested that the presence of new manufacturers in the market had an impact on the decision.

“The sport is changing so much, my best is still yet to come, so one year is good,” he said.

“It guarantees me at Red Bull Racing for 2015. One year is a long time, I don’t plan too far ahead.

“I have done three year deals in the past, but not when the category is changing so dramatically for everyone.

“There are new manufacturers, there are all sorts of things. It’s all happening, which is great for the sport.”

Whincup is this year aiming for a record sixth V8 Supercars Championship title having found success in five of the last six seasons.