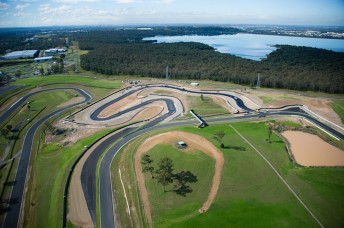 The extended Sydney layout was completed in 2012

The jury remains out on the suitability of Sydney Motorsport Park’s extended Brabham Grand Prix Circuit for V8 Supercars after a test run around the extra corners last weekend.

Added as part of a $9 million upgrade to the venue two years ago, the extra road packs seven officially numbered corners in just 830 metres, making it extremely tight for top level racing.

The Australian Racing Drivers’ Club, which operates the venue, has been keen to utilise the extra tarmac at events such as the Muscle Car Masters, drawing mixed reactions from competitors.

Although Kelly’s exploratory run was hampered by rain, the former Bathurst winner says that it was an interesting exercise.

“We’ve always discussed what the new bit of track would be like for one of our cars,” he told Speedcafe.com.

“We didn’t use it for the first year there (2012) because it is fairly tight and we weren’t too sure how one of our cars would go around it.

“We thought while the cars were there on Saturday it would be silly not to do a couple of laps around it just to see for future reference what was like.

“As it turned out it was wet so I was really just dribbling around on wet tyres, but we got a little bit of vision for V8s and a little bit of data for them to look at.”

He added of his impressions: “It was enjoyable; it’s a really great bit of track.

“It’s one of the most enjoyable bits of track I’ve been on, but I don’t know how we’d go with the whole field blazing through there.

“One thing it would do would be to add a whole new dimension because the circuit is currently one of the fastest places we go to.

“Coupled with that part it would be kind of half-half. Some of those corners would be the slowest in the championship.”

Although not ruling out the full circuit, a V8 Supercars spokesman confirmed to Speedcafe.com that the August 22-24 V8 Supercars event at SMP is scheduled to run on the regular Gardner GP layout.

“V8 Supercars asked Todd to provide feedback on his impressions of the Brabham Circuit,” the spokesman said of the test run.

“There was no specific intent, more of a fact finding mission.”

This year will mark just the second V8 Supercars Championship race appearance at SMP since the Sydney 500 began at Sydney Olympic Park in 2009.