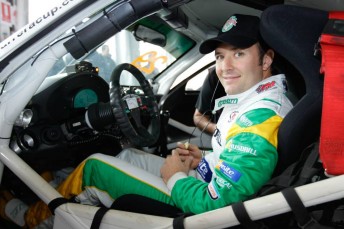 BRM finished second in last year’s standings with Nick Percat, who has since graduated to the V8 Supercars Championship with Walkinshaw Racing.

“BRM invited us into their stable this year and they will be able to help me achieve what I want out of motorsport this year, which is to learn more about the management and engineering side of the sport,” said Patrizi.

“They are also letting me bring some of my own guys to help run the car on the race weekends which makes it a bit more affordable – but it’s a great step for us this year.”

The 2014 Carrera Cup season will kick-off at the Clipsal 500 Adelaide in just over a week’s time.

Those joining the Professional ranks this year are Nick Foster (from Formula 3), Nick McBride (from the Dunlop Series), Michael Almond (from the GT3 Cup Challenge) and Power, while Renee Gracie is also back for a second season.

Twelve of the 23 entries expected to front for the opening round will be in the Elite Class, with new faces including part-time Australian GT driver Roger Lago, Finance Ezi proprietor Maurice Pickering and Brenton Ramsay, the son of Birrana Engineering founder Malcom.

Now a commercial helicopter pilot, Brenton himself raced during Birrana’s competition heyday, lining up alongside the likes of Simon Wills and Rick Kelly in the squad’s Formula Holdens.

Overseen by Malcom, the Ramsay entry will run under a new moniker, Phenix Motorsport.