Eli Evans will steer this VW Polo in Canberra

Eli Evans has made yet another car switch for next week’s season opener in Canberra with the Australian Rally Champion set to drive a Volkswagen Polo.

After campaigning a Honda Jazz for the past two seasons as an official factory entry, Evans was set to drive his older Civic Type-R at the National Capital Rally, but made the switch after delays in preparations.

“It’s a long story but we had some delays in preparing the Civic and that meant one of two things; not make the start in Canberra or find something else to drive,” said Evans.

“I didn’t have a car, but Justin Dowel did, so we’re going to lease Justin’s Volkswagen Polo for Canberra.

“We got a short test of probably 40 kilometres yesterday. It’s a good little car, very stable like the (Honda) Jazz was, and the car has a lot of good bits in it.”

Evans will run the Polo as Justin Dowel finished last year’s Coates Hire Rally Australia, with the Evans Motorsport team looking to only make minor adjustments and refinements prior to the start of the National Capital Rally.

“It’s a new car to me but I can see the potential,” said Evans. “The aim is to be competitive, and to aim for a podium finish, I think that’s realistic when you have a new car that you’re driving for the first time.”

“I was determined to get to Canberra, it was important to get some points to start the year off otherwise the other guys potentially could have gotten away from us and we never would have caught them up again.” 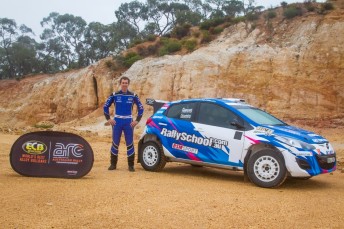 Brendan Reeves is back in the Mazda2

One driver sure to challenge Evans will be Brendan Reeves who will for the second year campaign the RallySchool.com.au Mazda2.

Reeves and his team spent a full day testing the Mazda2 resplendent in a new livery ahead of 2014 ARC opener car last weekend.

“With the experience we gained last year, I think our prospects for 2014 are very exciting,” said Reeves.

“I feel really comfortable in the Mazda2 and I’m confident of some really good results this year. I love driving the Mazda2 and really enjoy competing, so I’m counting down the days until the season starts,” Reeves added.

Shakedown and the Armor All Power Stage for the National Capital Rally begin Friday 28th February.

For all the latest news in rallying stay across Speedcafe.com in 2014