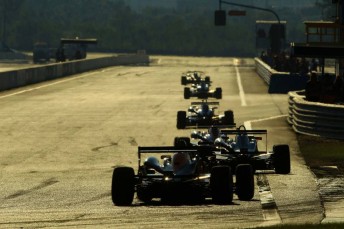 Formula 3 will carry the Gold Star into the future

The Confederation of Australian Motorsport has extended its Category Management Agreement with Formula 3 Management for a further three years.

The Formula 3 Australian Drivers’ Championship will continue to award the long-running Gold Star under the deal, which runs until the end of 2016.

Although CAMS plans to introduce a second wings and slicks class, Formula 4, into Australia next year, the governing body has been keen to emphasise its vision for a two-tier domestic open-wheel structure.

Confirmation of CAMS’ Formula 4 plans came shortly after it announced the axing of the Australian Formula Ford Championship, which has since been reborn as a national series for 2014.

“Formula 4 may well be on the horizon, but we are forever mindful about the history and the major part that Formula 3 plays in Australian motor sport,” said CAMS CEO Eugene Arocca.

“It’s an integral part of the open wheel pathway that will be in alignment for the benefit of those making their way from karting all the way to the very top of motor sport.

“The long term future of the CAMS Australian Formula 3 Championship is vital.”

F3M chairman Ian Richards, who also runs the R-Tek team, said the new agreement will give confidence to competitors.

“This announcement gives our current and future competitors, sponsors and stakeholders great confidence that Formula 3 is here to stay,” he said.

“From here, we can assure everyone involved that this is a championship worth investing in as it is clear it has a long-term future.

“Eugene (Arocca, CAMS CEO) and all at CAMS have been very supportive of recent efforts to grow the category and with this new agreement we can continue to work together for the betterment of open-wheel racing and the young stars of the future – after all, they are why we exist.”

The 2014 Formula 3 Australian Drivers’ Championship will kick-off on the streets of Adelaide later this month, with organisers hopeful of having as many as 14 cars on the grid.