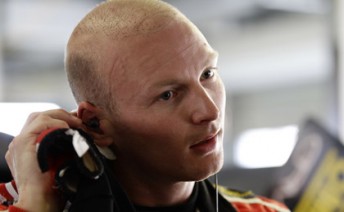 A shock enduro drive with former employer Garry Rogers Motorsport could pave the way for a full-time V8 Supercars return, according to Alex Premat.

The Frenchman, who lost his full-time seat at GRM to Swedish rookie Robert Dahlgren in January, has agreed a deal to return to his former team last week for the PIRTEK Enduro Cup, in a move he feels could reignite his V8 career.

Although initially surprised by the offer, the 31-year-old, who spent two years at GRM, is eagerly anticipating his co-driver role in the team’s new Volvo Polestar S60 V8 Supercar, which made its debut at the Sydney test last weekend.

Ever since he lost his drive at the Melbourne-based team, securing a V8 enduro drive had ranked highly among his 2014 hopes.

The former Nurburgring 24 Hour winner had even held enduro drive talks with Ford Performance Racing and the Holden Racing Team, but instead has opted to return to GRM.

“I’m very pleased to be back with the GRM Volvo team,” Premat told Speedcafe.com.

“It was really tough at the end of last year with Garry because I lost my drive. I was talking with some really good factory teams about enduro drives. I was talking to FPR and HRT but the Volvo option was better for the future.

“We had a good talk and I’m happy with what he said. When I said I was leaving the team last year I didn’t think they would be an option for a co drive this year but it seems that things change.

“I still have a good relationship with the team and the fact I know all the team should give me an advantage.

“You never know what will happen in the future maybe I can get back in a full time drive with the team if Volvo decide they want to run four cars or something like that next year.

“The car went pretty well in Sydney and I think the aero package looks really good.”

The team are yet to announce if he will partner Scott McLaughlin or his replacement Dahlgren for the Sandown, Bathurst and Gold Coast races.

Aside from his enduro commitments, Premat is finalising his plans for the 2014 season focussing his attentions on sportscar outings in Europe, after missing out on a potentially lucrative Super GT drive with Honda.

“I’m still in discussions with some teams to do the Nurburgring 24 and Spa 24 and few more races like Porsche Supercup,” added Premat.

“It’s taking time as business in Europe is not as good as it was in the past. Le Mans is still an option too.

“I nearly agreed a drive in Super GT with Honda but I just missed that by one day so I’m still working at things.”

To listen to the new Volvo Polestar Racing S60, click here for Speedcafe’s video from the Sydney Test Day