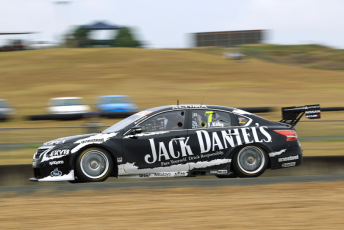 As Nissan Motorsport prepares to enter the new season with a revised aerodynamic package, work continues in Japan on engine upgrades that are unlikely to hit until mid-year.

While as much as 80 percent of the straightline deficit the team faced last year has been blamed on its previous aero kit, the Melbourne-based team shipped one of its VK56DE engines to Nismo’s headquarters in Tokyo, Japan, in search of further gains last November.

The company is using its high-end simulation and testing equipment to extract more power, torque and fuel economy from the engine, which had previously been developed by the formerly Kelly Racing-branded team internally.

Although emphasising the day-to-day communication between the team and Nismo, Todd Kelly told Speedcafe.com that the team will start the season with a largely unchanged package.

“Basically, what we’ve done is settle on a spec with which we’ll start the season, which is very similar to the one we ran from Bathurst onwards last year,” he said at the weekend’s Sydney test.

“We’ve committed enough parts to get us through the first half of the season with valves, valve springs, heads… the whole package.

“The only real difference is that last year we went probably a little bit too far with our ports and then had a couple of failures towards the end of the year.

“So the start of this season we’ve brought that back a little bit, which doesn’t really cost us any power but will give us more reliability.

“We’ve also done a lot of work on our cooling system to prevent some of the heat cycles that we were seeing last year.”

The upgrades, meanwhile, are expected to come from Japan, rather than the United States.

Kelly says that the prospect of a cylinder head casting change at Nissan’s Tennessee VK56 plant remains “in our plans”, but isn’t a short-term priority.

“If we do a cylinder head casting thing that’s a long-term project; that wouldn’t be on the cards for at least the next six months,” he said.

“The work at Nismo in Japan is ticking along quite well, there’s four or five emails and phone calls every day of the week between us and them.

“They’ve done a lot of work with the cylinder head and camshafts, a lot of simulation stuff with the technology they’ve got over there.

“There’s a good chance we can get some good gains working with what we’ve already got (the existing cylinder head).

“But for them to go through that development process, validate it and then have us replicate it and implement it it’s still going to be a six month project either way until we get our next update.”

Although Kelly had hoped to validate the team’s work at the test, the former Bathurst 1000 winner says the jury is still out on the extent of the improvement.

“It’s a little bit hard to tell, we don’t get any sector times or speed trap times like we would at a race meeting,” he said after all four of his cars ended the day inside the top 10.

“The only data we can get is physically standing on the pit wall and listening when the other cars are changing gears, and looking at overall lap time.

“Both of those don’t look too bad, we really need to get to Clipsal and the Grand Prix to see where we really sit, but I’m pretty confident that we’re better than we were last year.”

The new Nissan kit includes a repositioned rear wing that now sits further back relative to the car’s rear axle centre-line than that seen on the other four marques.

Previous Story POLL: Which is your favourite 2014 V8 livery?