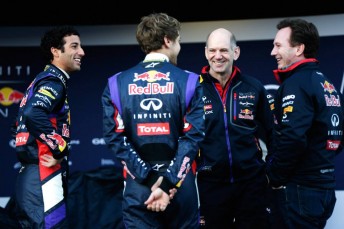 Red Bull Racing’s Adrian Newey has admitted the design of the new RB10 contributed to the team’s disastrous run at the opening Formula 1 pre-season test.

The F1 design guru revealed that an aggressive strategy regarding the packaging of the  RB10‘s exhaust played a part in limiting the team to just 31 laps at the four day Jerez test last month.

Newey confirmed heat from the RB10’s exhaust had set fire to bodywork during the test at the former Spanish Grand Prix venue. This came after serious hardware issues with Renault’s new 1.6 litre engine, which hampered both Toro Rosso and Caterham over the four days.

As a result, reigning world champion Sebastian Vettel and Daniel Ricciardo banked just 31 laps between them and were well off the pace of the leading Ferrari and Mercedes powered machines.

Former McLaren and Williams designer, Newey, took full responsibility for the exhaust issue and is confident the problem will be rectified before the second pre-season test in Bahrain this week.

“What stopped us at Jerez, on our side as opposed to Renault’s side, was a problem where the bodywork local to the exhaust was catching fire,” Newey told AUTOSPORT.

“Hands up on our side, that was a Red Bull problem.”

“It was, you could argue, a result of aggressive packaging but we felt that we needed to take a few risks to try to get a good package that would minimise the aerodynamic damage of this very large cooling requirement.

“It’s a problem which hopefully we can get on top of ready for Bahrain.

“It was really a lack of time [that caused the problem]. It was something that we could have proved out on the dyno if we had managed to get everything together earlier.”

Renault came in for heavy criticism following their engine problems suffered in Jerez and extensive work has been carried out behind the scenes to avoid a repeat of the failure in Bahrain this week.

Both Lotus, who were missing from the first test, and Toro Rosso have tested new parts from the French manufacturer ahead of the Bahrain test, which begins on Wednesday.

Meanwhile, Vettel will be behind the wheel for Red Bull on Wednesday and Thursday of the test before handing the car over to Ricciardo for Friday and Saturday.

Did you view the new for 2014 Formula 1 cars after the Jerez test? Click here to view Speedcafe’s gallery of the 2014 machines.