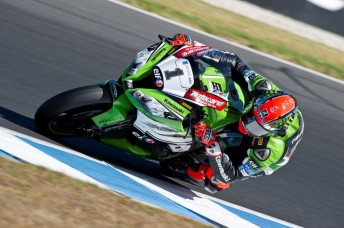 The British rider clocked a time of 1:30.239s in the two hour morning session which was just five thousandths of a second slower than Carlos Checa’s circuit record.

The time remained at the top of the time sheets throughout afternoon session ensuring the Kawasaki left the test as the quickest rider. However, his day came to a premature end when his ZX-10R encountered a technical issue.

Team), who suffered two crashes during the test. The Frenchman was uninjured in both occasions.

during the off-season. He finished the test in seventh spot while completing 92 laps over the two days.

Pata Honda duo Leon Haslam and Jonathan Rea both suffered a late test crash leaving them eighth and ninth, but they are taking to the first round some positives after closing to within half a second of the fastest time.

Ducati’s Chaz Davies rounded out the top 10 with a time only eight tenths off Sykes‘ pace.

Michel Fabrizio (Iron Brain Kawasaki SBK), who fell on Monday, is being kept at the hospital as a precaution despite x-rays revealing no signs of injury.

Phillip Island hosts the opening round of the 2014 World Superbike Championship this weekend.