The 49-year-old veteran enjoyed his first taste of the Triple Eight-built Holden at Sydney Motorsport Park’s compulsory test day on the weekend.

Following an off-season dominated by talk of his ‘retirement’ and subsequent return, Ingall surprised by topping the weather-hit morning session in Sydney.

He went on to set the 13th best lap in the largely dry afternoon, although both time sheets were muddied by differing tyre qualities.

“We were more concerned with getting a good hard-tyre ahead of Clipsal, with that being the nominated tyre for the round,” said an encouraged Ingall of the Sydney test.

“You never really know until everyone rolls into the first round and then we’ll know the full story but it’s not a bad indication to see where we’re at.

“No one messes around at test days, everyone is on the gas pretty hard so we’re definitely not last.” 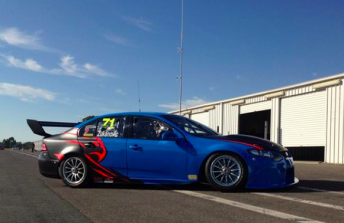 The LDM squad is this year being led by Bruin Beasley, who shut down his Minda Motorsport concern, which included a Dunlop Series program, late last year.

Although not testing its four V8 Supercars Championship Falcons in the short break between Sydney and Adelaide, FPR is also in action today with its Dunlop Series outfit.

The test marks the first laps for former Minda driver Cameron Waters in an FPR Falcon.

Heimgartner tested with Dick Johnson Racing in Sydney at the weekend ahead of a possible endurance berth with the team.