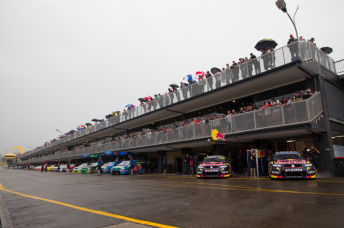 V8 Supercars will shift its focus towards pay TV in 2015

Confirmation that just six V8 Supercars events will be broadcast live on free-to-air television in 2015 is expected to take place before the end of the month.

The category confirmed that the pay TV station would show ”every minute of practice, qualifying, support categories and the championship races live and in HD”, but has yet to reveal details on Ten’s involvement.

While V8 Supercars CEO James Warburton suggested that clarity would not occur until the launch of the 2015 racing calendar later this year, the Australian Financial Review today reports that an announcement will take place around the season-opening Clipsal 500.

It is expected that Ten will have live rights to only the Adelaide, Darwin, Townsville, Bathurst, Gold Coast and Sydney races; five of which are expected to include twilight races. The remainder of the season would likely be shown by Ten on a delayed basis.

A V8 Supercars spokesman told Speedcafe.com that it is currently working with Fox Sports and Ten on locking down a date for the announcement of its 2015 scheduling.

The deal comes amid a worldwide trend towards pay TV orientated sports broadcasting that saw Formula 1 take up a similar deal with Sky Sports and the BBC two years ago.

As previously discussed, majority V8 Supercars owner Archer Capital and the teams will both benefit directly from the $241 million rights deal.

The later may be faced with a tougher sponsorship market, however, due to the systematically lower audience size associated with pay television.

Next Story POLL: Which is your favourite 2014 V8 livery?