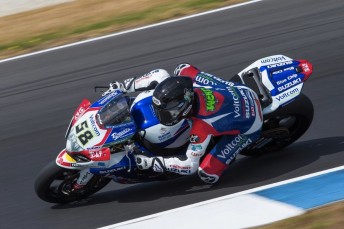 Eugene Laverty sets the pace in testing at Phillip Island

New Suzuki signing Eugene Laverty has set the pace on the opening day of World Superbike testing at Phillip Island.

Laverty remained on top of the timesheets in the second two-hour session, but was unable to better his benchmark morning time of 1:30.513s.

Sykes was the biggest workaholic over the two sessions, logging a combined total of 67 laps around the 4.45km circuit.

Laverty set the fastest time in the opening session of the official two-day world superbike test ahead of the opening round of the championship this weekend.

WSBK newcomers Erik Buell Racing finished down the order with Geoff May and Aaron Yates on the 1190Rx twin cylinder bikes.

Testing continues tomorrow ahead of the opening round of the Superbike World Championship at Phillip Island this weekend.

*Stay tuned to Speedcafe.com for full coverage of Round 1 of the WSBK round from the picturesque Victorian track this weekend.