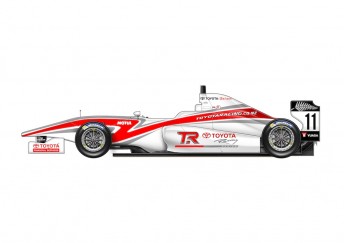 Last year the Palmerston North-based manufacturer gave the go-ahead to continue the hugely popular Toyota Racing Series which will see the Italian Tatuus built FT40, which has served the series for 10 years, replaced with the FT50, constructed by the same company, for next season.

The tub will comply with the latest FIA Formula 3 safety standards including high cockpit side helmet protection, removable safety seat, additional strengthening in the main chassis and front and rear crash structures.

“The new car represents a significant ongoing commitment by Toyota to the development of the next generation of New Zealand drivers and to the health of motorsport in this country,” Toyota NZ’s John Fowke said.

“As TRS graduates prepare to enter F1, Le Mans and other professional global series we recognise the crucial role TRS has played over the past decade and the need to continue providing a championship where young drivers can advance their career and develop their talents.”

Retained on the new cars will be the extremely reliable 1.8-litre four cylinder production engine that runs on E85 ethanol fuel and is good for 160kW (215bhp) of power.

TRS manager Barrie Thomlinson said that technology aligns the new cars with many top flight categories which operate around the world.

The first car is expected to begin testing in April/May in preparation for the delivery of the production race cars mid-year.

Newly crowned 2014 TRS champion Andrew Tang is unlikely to be able to defend his crown owing to the timing of the Singaporean’s compulsory national service next year however he shares the excitement over the new car’s unveiling.

“There was a sense of excitement and pride among drivers and teams and of course the TRS management when the new car was being unveiled and I shared that buzz after being crowned 2014 TRS Champion,” Tang told Speedcafe.com

“After competing in the series for 2 years, I have come to realise not only how competitive the series is, but also how well it is run.

“This new car is a perfect way to carry on the series – a huge upgrade in not only the technical aspect (as the new car is a lot more similar to the ones we run in Europe now), but also in safety. This prepares drivers even more for the European season.”