Famous number on pole for Daytona 500 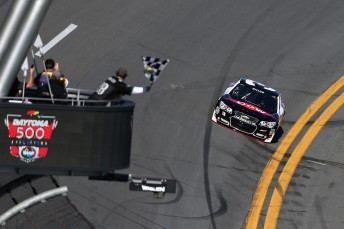 The return of the #3 in NASCAR’s premier Sprint Cup series has been marked with the Coors Light Pole for rookie Austin Dillon at the Daytona 500.

Not since the passing of Dale Earnhardt Sr. at the corresponding race in 2001 has the #3 been seen in Sprint Cup, and plenty of focus has been placed on the number’s return since car owner Richard Childress confirmed that his grandson would carry it in 2014.

“I feel like our engines have been really good since we’ve been here at Daytona,” said Dillon.

“I just had to get my shifts. And I knew that hopefully I could hold the wheel straight for two laps.”

After Dillon took the pole with a speed of 315.462km/h (196.019 mph), the Richard Childress Racing operation now wants the focus to be on the race next weekend.

“I couldn’t be more proud of Austin,” said Childress.

“We wanted to come down here and put on a good show with the #3.”

Dillon and Martin Truex Jr. have set their starting positions in the Daytona 500 as first and second. The rest of the drivers will race in the Budweiser Duel events later in the week to determine their position in the race. With 49 cars fighting for the 43 starting spots, the twin-150 mile (60 lap) races will be run Friday morning Australian time and are sure to provide plenty of action.

“We’ve brought great cars here. Last night we had a competitive race and today we backed that up with good speed on these cars,” said Ambrose.

“We’re up in the stratosphere on qualifying day, which is the highest I’ve really ever been here for a 500 qualifying. We’re gonna get a top-10 speed before the Duel and showed some speed in the car.”

A combination of results in those races, qualifying speed and provisional points will ultimately set the starting grid for ‘The Great American’ race.