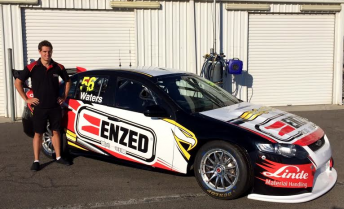 The Team Enzed FPR livery was unveiled at Winton this morning ahead of the 2011 Australian Formula Ford Champion’s first test in the car.

“I am totally pumped for this season and ready to make the most of the incredible opportunity I have before me,” he said.

“Racing for FPR in the Dunlop Series with the full backing of ENZED is a dream come true and I will be going all out to give FPR its first ever Dunlop Series title this year.”

The company’s deal to support the Touring Car Masters category was meanwhile announced at a category launch over the weekend.

Like the Dunlop Series, the Touring Car Masters will open its 2014 season at the Clipsal 500 later this month.

Several new cars are expected to front, including a 1976 Chevrolet Monza for Tony Hunter, 1971 Pontiac Trans-Am for Ian Palmer and an XA Ford Falcon for Bruce McLeod.