The Volvos completed nearly 200 laps between them

After a successful Sydney test, Volvo will turn its focus towards beefing up its S60 V8 Supercar package in preparation for Adelaide’s gruelling season-opener.

The team quashed doubts about its engine package by completing almost 200 laps across its two cars during Saturday’s hit-out.

The B8444S units in the Scott McLaughlin and Robert Dahlgren driven cars performed strongly all day under the watchful eye of Polestar’s head of engine development, Mattias Evensson.

The only major problem encountered was one of power steering packaging, with both cars suffering almost simultaneous failures in the minutes prior to the halftime break.

The problems embarrassingly saw both cars garage-bound while the fan walk took place with the remainder of the field on the grid.

Dahlgren’s machine was returned to the track for the recommencement of running, while a lack of spares ensured a somewhat longer delay for McLaughlin.

Dahlgren and McLaughlin were 17th and 19th respectively in the day’s final order, which as usual was highly influenced by tyre condition. 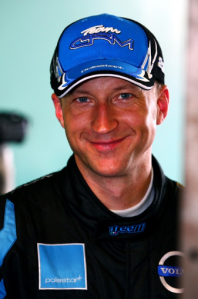 “Obviously we’ve got to strip them down and have a look but the engines ran almost 200 laps without a problem.

“Chassis-wise the balance was different, we had a bit of understeer, but we can now go away and work on that for Clipsal.

“Obviously we’ve got some power steering issues there that we’ve got to sort out, but we’ll go away and think about it before hitting the track in Adelaide.”

“It’s unfortunate that people are running different tyres and the weather was spitting because it doesn’t give you a good guage, but I think he did a really good job,” he said.

“Those guys went through a range of basic changes so he’s now got a feel for what all those do.

“A couple of changes they made produced some good steps forward, so it was very positive.”

Dahlgren said he thoroughly enjoyed the day, despite the trying conditions.

“The conditions could not have been tougher with torrential rain and a drying track with a completely new car,” he said.

“For me there was a lot of new impressions, but I got in to it and it is just so much fun.”

The Polestar engine will need to undergo V8 Supercars homolgation testing this week, while Rogers told Speedcafe.com that a decision on whether any more track testing will take place is due to be made in the coming days.

The long-time team owner stressed the importance of workshop time, which will include strengthening its spare parts stocks before taking to Adelaide’s unforgiving streets.

The cars ran in Sydney with ‘prototype’ aerodynamic pieces, with work beginning on the production items back at the workshop.

“We should be fine for spares by Adelaide,” said Rogers.

“We’ve had fabbys working at the factory while the cars were running in Sydney.

“The production of those parts is coming along and with more engines here as well it’s looking good.”