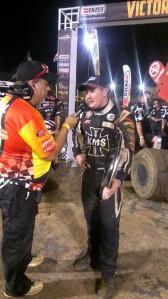 Brooke Tatnell strategically held his ENZED World Series Sprintcars double point Joker card until the last moment and then brought it out on home territory for the Krikke Motorsport team to deliver the win.

Admitting after the event he didn’t want to use the Joker, the Minnesota based Sydney-sider led lights to flag in the 30 lap affair.

Defending Champion, James McFadden was central to the controversy in Bunbury, being sent rear of field with three laps remaining when he contacted with Shane Stewart. Stewart’s Milwaukee Powertools entry rolled heavily. McFadden was deemed the cause of the incident and sent to the back.

He fought forward and ended up finishing the race in eighth position.

Lines set the quick time at the beginning of the night and then worked through without problem to finish the feature race in second position.

Shaun Bradford had a bizarre incident during the Amadio Wines Shootout when the floor of his Sprintcar came adrift after riding a rut. Bradford quipped that all he could see was the racetrack passing him by at a rapid rate.

Making amends for that, Bradford was elevated to third when Stewart rolled out of the race.

Robbie Farr and Ian Madsen rounded out the top five.

The ENZED World Series Sprintcars Championship is set for a thrilling finale next weekend at the Perth Motorplex, with the Championship still well and truly up for grabs.