Denny Hamlin had the fastest car when it counted as he swept into the lead over the closing laps to win NASCAR’s version of the pre-season cup – The Sprint Unlimited.

It was Hamlin’s second win in the race and is his second race victory in a row after he won the 2013 finale in Miami.

The race which featured all the pole winners from 2013 started with 18 cars, but that was sliced when a multicar wreck eliminated Matt Kenseth, Tony Stewart, Jeff Gordon, Carl Edwards, Kurt Busch, Danica Patrick and Ricky Stenhouse Jr. in the second segment of the race.

“The best car won – that’s for sure,” said Hamlin in Victory Lane. 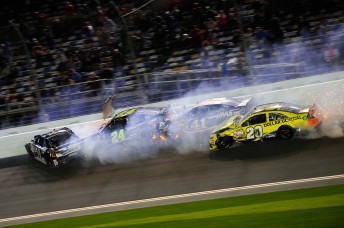 The big wreck with all the big names

“It was survival of the fittest for sure. With three (laps) to go we were at the tail-end of a very small pack and it appeared hard to get really good run. But this car was phenomenal over those last couple of laps.”

Australia’s Marcos Ambrose avoided the big crash and was placed inside the top five during the final segment when he came together with Dale Earnhardt Jr. Earnhardt Jr. went to the garage while the Australian, who said he would go all out to win the race, finished seventh.

“We were actually in a pretty good position,” said Ambrose.

“I was trying to help Junior there and ended up hurting him and hurting myself. I feel bad for Junior, but we finished the race with the Stanley car, but we were just a little disappointed with our effort.”

Attention will switch tomorrow to qualifying for the Daytona 500 with the two fastest qualifiers to start on the front row. The rest of the field will be set later in the week in the twin ‘Duel’ races ahead of the Great American Race next weekend.

Next Story Famous number on pole for Daytona 500

Previous Story Ambrose to go all out in NASCAR curtain raiser