Ambrose to go all out in NASCAR curtain raiser

Ambrose to go all out in NASCAR curtain raiser 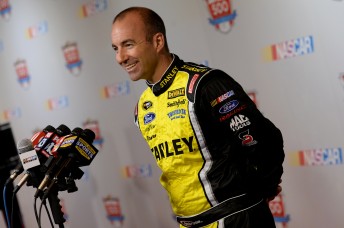 Ambrose speaks with the media in Daytona

Marcos Ambrose is taking a “win it or bin it” approach to NASCAR’s pre-season opener ‘The Sprint Unlimited’ at Daytona International Speedway today.

Importantly the car the Tasmanian will use is not the one he will qualify for the famed Dayton 500, that is being kept in the garage for the biggest race in NASCAR.

The ‘The Sprint Unlimited’ brings together the pole winners from 2013, Ambrose earning his start after scoring the fastest time at Watkins Glen.

The 75 lap race is broken down into three segments. One of the great unknowns in today’s race is the final format as fan input dictates a range of options. Fans can cast their votes to set the number of laps in each of the three segments as well as determine how drivers will line up at the start of the event and how they will line up for the restart of the final segment.

“I’m really going to go for broke and I want to be in the last shootout for the run home and do whatever I can to win that cash,” said Ambrose.

“It gives us the chance to shake our team down ahead of the Daytona 500.

“Our best car is the one we will qualify for the Daytona 500 and that’s the one we have put all the effort into for the big race.”

Fans in Australia can submit their votes at NASCAR.com/SprintUnlimited. Voting is live now and will continue after the race itself starts for each of the following segments.

Here Ambrose speaks ahead of the ‘The Sprint Unlimited’