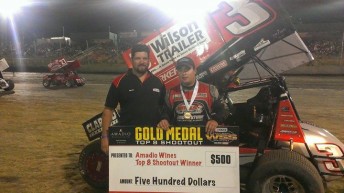 Mount Gambier’s Steven Lines pushed through the pain barrier to take a critical round 10 of ENZED World Series Sprintcars at the Perth Motorplex, extending his Championship lead over James McFadden to 172 points.

Lines partially dislocated his shoulder earlier in the night when an object flew from the clay track and crunched the wraparound containment seat of the Wilson Trailer car directly into his shoulder.

With that placed back in, he showed little pain in setting pole position in the Amadio Wines Gold Shootout.

Last round winner, Jamie Veal continued his good form of late, setting off in the lead at the start on the wide 500-metre plus Motorplex track.

On lap eight, Lines pounced around Veal – using the high banks to their full advantage to take the lead. From there, Lines motored on, just contending with traffic in front of him as he cruised to victory lane.

“My team give me a great car every time we come out on the track,” said Lines. “I get the easy job of driving it. My arm’s not too bad but I guess we’ll see how it feels in the morning. My safety equipment did the job and now we can move on to tomorrow night’s round at Bunbury and keep this Championship rolling.”

Lines’ key Championship rival – defending Champion James McFadden – could managed just sixth, despite setting the Hog’s Breath Cafe fast time at the beginning of the night. He only just scored sixth, screaming past Dylan Jenkin as the chequers were waving.

Brooke Tatnell, who is battling to get the Krikke Motorsport Toyota Genuine Parts machine onto the podium overall in the Championship, claimed a crucial third place.

Ian Madsen and Luke Dillon rounded out the top five. Madsen had to do it the tough way after finishing second in the B-Main and then moved forward from 16th, earning himself the American Racer Hard Charger Award.

The Series winds two hours down the road to Bunbury Speedway for round 11 tonight.