Russell Ingall made the most of a drying track to top the time sheets at the halfway mark of Sydney Motorsport Park’s pre-season V8 Supercars test.

The full-field hit-out started in wet conditions, while persistent drizzle ensured the times fell slowly during the morning.

The track eventually proved dry enough for slicks, but Ingall’s time of 1:32.1s still sits some three seconds adrift of the lap record.

The two Volvos are missing from the halftime grid walk having struck problems in the closing stages of the session.

After a productive morning that saw the two cars turn almost 100 laps between them, the Robert Dahlgren and Scott McLaughlin entries both began blowing smoke.

Dahlgren coasted his back into pitlane while McLaughlin’s returned on a flat-bed. 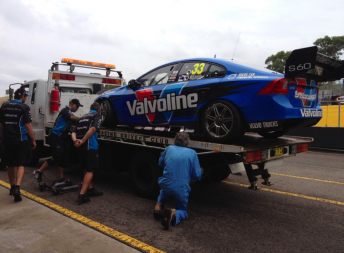 The Volvos turned plenty of laps before finding trouble

“We’ve done a lot of running and we’re happy. We would have liked a bit more time (before the test) but that’s always the case.”

He added of the problems, which are said to have been power-steering related on both cars: “We think they’re just basic things so we’ll be back out in the afternoon.”

The session’s one and only red flag was called at the two hour and 10 minute mark to recover Craig Lowndes’ spun Red Bull Holden.

Lowndes had earlier completed just one lap in the first 80 minutes after a power steering problem that team manager Mark Dutton put down to “finger trouble” with new components.

Van Gisbergen’s morning was similarly sparse, with the Tekno Holden enduring a steering problem of its own before the team made extensive front-end suspension changes.

“We’re happy to sit out in this weather,” said Van Gisbergen. “There’s no point being out there in this.”

Ford Performance Racing meanwhile reported no issues with its brand-new chassis for Mark Winterbottom, which had not turned a wheel prior to today.

David Reynolds has moved into the chassis used by Winterbottom last year and set the 13th quickest time.

Oliver Gavin and Tony D’Alberto had their first tastes of Walkinshaw’s #222 and #47 Commodores respectively, while Greg Murphy was in action over at the Holden Racing Team.

Alex Buncombe enjoyed his first ever V8 Supercar seat time in Todd Kelly’s Nissan ahead of a possible endurance berth later in the year.

Andre Heimgartner is at Sydney Motorsport Park but is not expected to drive due to illness.

See below for the Session 1 result

Previous Story All eyes on Volvo at Sydney V8 test