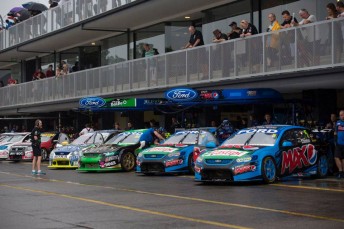 Emergency parts had to be flown into Sydney Motorsport Park today after Ford Performance Racing brought the wrong drop gear ratio to the pre-season test.

All four of the factory Ford entries started the day with the incorrect ratio; a mistake team principal Tim Edwards later put down to “confusion”.

The Falcons could all be heard hitting the rev limiter well before the end of the front-straight once the track had dried from the early morning rain.

Realising its error, the team borrowed two of the correct drop gears from customer team Dick Johnson Racing while also flying more of the parts from its Melbourne base.

The shipment arrived in time for the correct ratios to be installed directly following the midday break.

“There was a bit of confusion about which one was the drop gear for this event,” Edwards admitted to Speedcafe.com at the completion of the test.

“Fortunately we already had someone on a plane coming up and, as luck would have it, we had half an hour to get it to them and we were able to do that.”

Edwards downplayed the impact of the mistake on the day’s testing.

“No, not really,” he said of whether it hampered his team’s test, “because the only time we hit the limiter here is on the main straight.”

The Mark Winterbottom, Chaz Mostert, David Reynolds and Jack Perkins driven cars were in the bottom half of the field for the majority of the day; positions that Edwards put down to track and tyre conditions.

“We didn’t look at the time sheets because when your tyres aren’t great it’s just pointless,” he said.

“The weather hampered our test plan a little bit but we still got a lot of things done.”

“It sat around gathering dust for six months so we thought we’d run it,” said Edwards when asked of the reason for the new chassis.

“There’s no real science behind it, it was a paperweight sitting in the corner so we thought we should run it.”