All eyes on Volvo at Sydney V8 test

All eyes on Volvo at Sydney V8 test Volvo will be the focal point of the pre-season test

Volvo Polestar Racing will be the focal point of attention at today’s Sydney Motorsport Park V8 Supercars test as the team’s S60s make their first public appearance in anger.

The Volvo package has completed limited track running in the lead-up to the public hit-out, with a series of straightline aero outings followed by a single Phillip Island test that was aborted early due to engine problems.

Swede Robert Dahlgren has been assigned the first completed chassis that undertook the aero testing, while team-mate Scott McLaughlin steps into the latest car, which is yet to have received even a shakedown.

Team owner Garry Rogers, whose crew has been joined by Polestar’s heavyweights in Sydney, told Speedcafe.com that simply running reliably would make for a successful day.

“A good result here is doing our best, if we all do our best we’ll all be very happy,” he said.

“We just need to do a few laps and get on with it from there.” 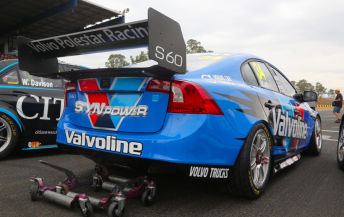 Rogers says that his team now has six of the Polestar-built engines in its pool following the arrival of two more in recent days.

Despite the greenness of the package, the might of Polestar’s engine department and the imposing aero kit homologated from the East Sale testing has left many in the paddock expecting competitive early speed from the Valvoline-backed entries.

The motors, which feature a 60 degree bank angle and a flatplane crankshaft, promise to bring another distinct sound to the championship.

The lack of pre-season running meanwhile ensures that former Scandinavian Touring Car Championship driver Dahlgren will head to Adelaide as one of the least experienced rookies in V8 Supercars history.

“It’ll be a bit of a steep learning curve,” he told Speedcafe.com.

“I’ve done as much as I can to prepare, but before you’ve been in the car properly you don’t know what to prepare for.

“I won’t be going flat-out from the first lap, I’ll be taking one step at a time and hopefully by the end, if we get a dry day, I’ll get the hang of the car and find the key how to drive car.”

The typically blunt Rogers meanwhile swatted away suggestions that Dahlgren’s lack of miles could be a concern.

It is yet to be decided whether any more track testing will be completed before the season-opening Clipsal 500 Adelaide in two weeks time.

“I’ll talk with the boys after this weekend is over and look at what we’ve got to do in preparation for Adelaide versus just going and doing some testing,” said Rogers. “We’ll decide from there.”