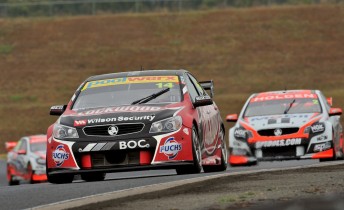 Fabian Couthard ended the day with the fastest time

Fabian Coulthard set the fastest time at Sydney Motorsport Park at the end of a pre-season test day dominated by mixed weather conditions.

The Lockwood Holden recorded a best of 1:30.48s on his 36th lap of a largely dry afternoon before increased drizzle spelt the end of fast times.

As usual, tyre condition and compound choice played a large role in the final order, with the eventual top runners having elected to use the softer option.

The afternoon’s session ran green for its duration, leaving an off from Craig Lowndes during the mid-morning as the day’s only stoppage.

The morning had started in heavily wet conditions, ensuring the early running was undertaken on grooved rubber.

Russell Ingall held the fastest time by the halfway point before ending the day in 13th.

The team’s only major issue centred on power steering, with the two cars billowing smoke almost simultaneously prior to the halfway break.

Craig Lowndes and Shane van Gisbergen suffered their own steering rack problems during the morning, while Dick Johnson Racing endured likewise in the afternoon.

Guest drivers Oliver Gavin (Walkinshaw Racing) and Alex Buncombe (Nissan Motorsport) both enthused over their laps despite the poor conditions.

See below for the Session 2 result