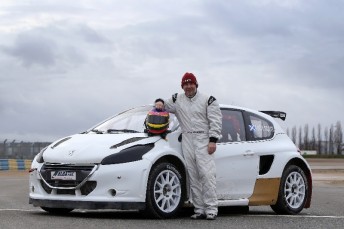 Former F1 world champion Jacques Villeneuve has signed up for the newly formed FIA World Rallycross Championship which starts in May.

Villeneuve, who led Williams to the F1 title in 1997, will drive an Albatec Racing-prepared Peugeot 208 that reputedly develops an astonishing 600bhp.

Martin Anayi, managing director of FIA World RX for IMG Motorsport, said the inclusion of Villeneuve solidifies the growing profile of Rallycross, once massively popular across the world including Australia during the 1970’s.

“The news that Jacques Villeneuve is joining the FIA World Rallycross Championship for its inaugural season is a tremendous coup,” Anayi said.

“It is massively exciting for everybody involved in the championship and for all of our fans. It will be great to see world champions from different disciplines battling it out in FIA World RX.”

The 42-year-old Villeneuve, who also captured the IndyCar series and Indy 500 before his F1 success, has become something of a racing nomad since calling time on his grand prix career.

Among disciplines he has tried his hand at are NASCAR, Le Mans 24 Hour, ice racing and V8 Supercars.

“With my previous ice racing experience, I’m excited about driving sideways in a 600bhp, four-wheel-drive Peugeot 208 over the combination of loose and tarmac surfaces, not to mention the jumps,” Villeneuve said.

Villeneuve has already successfully tested the potent Peugeot in France.

The opening round of the 12-round 2014 FIA World Rallycross Championship is scheduled for Montalegre, Portugal, from May 3-4.