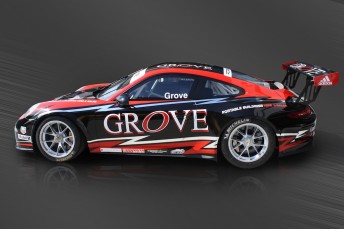 The privateer Grove outfit is among the first to reveal its 2014 Carrera Cup Australia livery.

Based on a variation of its warpaint from last season Grove will run with predominantly black and red livery reflective of his corporate image.

“Going from a sequential gearbox to a paddle shift is a huge advantage and it will give us good speed.

“We wanted to keep the livery clean and uncluttered, using the same corporate image that we utilise across Grove Group.

“The car is designed around Grove Group’s corporate colours, however this year we’ve added a little chrome.”

“I think the advantages that the car brings will aid the professional drivers but I think we will see more of a gain from the elite class drivers.

“I do believe that there will be a lot more close racing all of the way down the grid.”