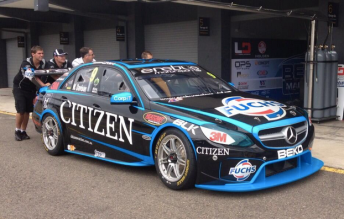 Erebus Motorsport has lifted the lid on its pair of E63 Mercedes fighters that it will lead into its second season of V8 Supercars.

Led by its colourful owner Betty Klimenko, Erebus elected to unveil, the #4 and #9 V8s which incumbent Lee Holdsworth and incoming Will Davison will campaign, online.

Holdsworth’s entry will run in Sydney with primary branding from The Children’s Hospital at Westmead’s as part of a team charity program.

The reveal is in stark contrast to last year when the team spent a hefty six-figure sum on an extravagant launch in Sydney ahead of its championship debut.

Klimenko had previously flagged her intention to make a considerable donation to charity in what would otherwise been spent on a fancy reveal.

Davison left Ford Performance Racing to take up a seat at Erebus, replacing German Maro Engel with the team shrinking from three to two cars following his maiden year of V8 Supercars competition after buying out the Stone Brothers operation.

See below for Erebus teaser video

Next Story Heimgartner to test DJR Falcon at SMP