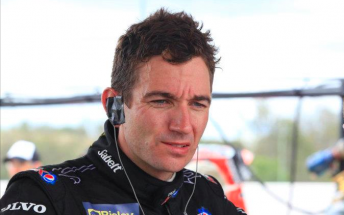 Oliver Gavin competed in the 2011 GC600 with Kelly Racing

Both drivers have spent the week in Australia following the Bathurst 12 Hour, where Gavin drove a Rotek Racing Audi R8 and Buncombe a Nismo Nissan GT-R.

The 41-year-old Corvette Racing stalwart had his one and only taste of V8 Supercar power to date with Kelly Racing at the 2011 Gold Coast 600.

“He’s in the country and has just done Bathurst, so if we were to do a deal with him then first of all we’d like to see a bit more of him and see how he goes,” said Burgess of Gavin.

“If either party isn’t comfortable with it then nothing is really lost, but he’ll have a few laps and we’ll see if we end up doing a deal.

“It’s a two-way street. He has to be comfortable with us as well as us with him.”

Gavin iterated his keenness for an endurance seat to Speedcafe.com while at the 12 Hour.

“I came here to get some experience and we will see how it goes from there,” he said.

“If there is an opportunity there I’d like to get the chance. We will see what happens in the future.”

HRT pair Luff and Greg Murphy will also attend the test, while the team’s Supercheap entry will be the sole domain of new full-time recruit Tim Slade. 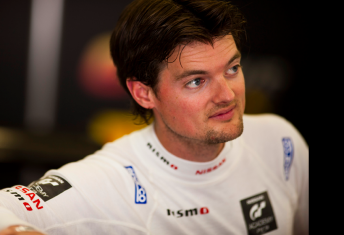 Alex Buncombe at the Bathurst 12 Hour

At Nissan, Buncombe’s appearance could also be a precursor to an endurance drive following previous decelerations from Nissan Motorsport’s global manager Darren Cox that the company will import internationals this year.

Buncombe was another to openly discuss his interest in V8 Supercars while at the 12 Hour.

For now the test is being officially put down to the manufacturer’s global driving sharing program, which last year saw German Michael Krumm and Spaniard Lucas Ordonez test with the squad at Winton.

“Our Nissan team has already been a part of the global driver exchange program, and this is just another example of this,” said team owner and driver Todd Kelly.

“Any opportunity we have for them to test other drivers in the Nissan family is extremely valuable for the future.

“Rick drove with Alex in the GT-R at Bathurst and Rick was very complimentary of all the drivers.

“They’re all top level with plenty of experience, so hopefully Alex can get a good feel for our cars and we can learn stuff from him at the test.”

Buncombe says he will have a big task ahead of him to adapt to the car and circuit in minimal laps.

“It will be a big learning process for me,” he said.

“I do drive some historic cars back in Europe, so I’m used to cars with lots of power but not much grip.

“I know the Nissan Altima has fantastic power – similar to the Nissan GT-R we drove at Bathurst – but less driver aids, so I’ll have to get used to that.

“The sliding around part is something I’m really looking forward to.

“I really want to do a solid job for the team. They have an important day ahead of them with the first test of the year, so I really appreciate the time in the car.”

Kelly earlier this week told Speedafe.com of the Sydney test’s importance to the team as it marks the first time track appearance for the Altima’s new aerodynamic package.