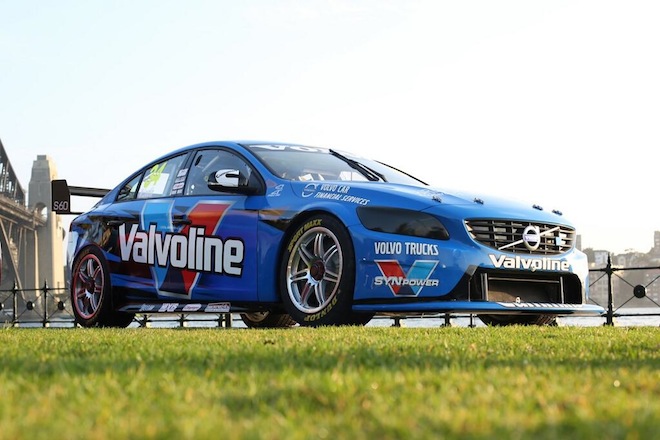 Volvo took the wraps off its S60

Volvo Polestar Racing has launched its S60 V8 Supercar ahead of its public track debut at Sydney Motorsport Park this weekend.

As previously reported, Garry Rogers Motorsport’s move to Volvo machinery this season coincides with the return of Valvoline as its major sponsor.

Valvoline features on the flanks of the car, while the Cure for Life Foundation currently occupies the otherwise empty bonnet.

Volvo and its subsidiary companies Volvo Trucks and Volvo Car Financial Services also feature on the car, while the Swedish flag adorns the roof.

The latter looms as the biggest question mark ahead of the season, with the Yamaha-designed unit having enjoyed limited track testing in its 5.0 litre form.

“This is an historic day in the history of Volvo Car Australia,” said the company’s managing director Matt Braid.

“As the first luxury car manufacturer to enter V8 Supercars with a factory team, we’re delighted to reveal our Volvo S60 race car to meet the challenge of the world’s toughest touring car series and strengthen the presence of the S60 model line – and Volvo brand – here in Australia.” Valvoline features on the sides and rear of the car

Its drivers Scott McLaughlin and Swede Robert Dahlgren were both on hand for the launch, which took place at Sydney Harbour.

The car completed its initial straight-line and track testing with the squad’s existing Walkinshaw Racing-sourced Holden engine supply before the debut of the B8444S in January.

Volvo joins Nissan and Mercedes in running a double-headcam V8 engine in the championship while, uniquely, the B8444S features 60 degree angle cylinder banks.

At the launch, Rogers paid tribute to his own Australian crew, which has built the two chassis for the new season.

“For all the GRM staff it is incredibly satisfying to see the next step of all the hard work and energy they have put into designing and building the Volvo S60 V8 Supercar over the last 12 months,” he said.

“During this process, this same group of workers were also responsible for the preparation and running of our 2013 V8 Supercar Championship cars, so it makes me extremely proud to be surrounded by such a never-say- die group. We cannot wait to get on with the racing.” 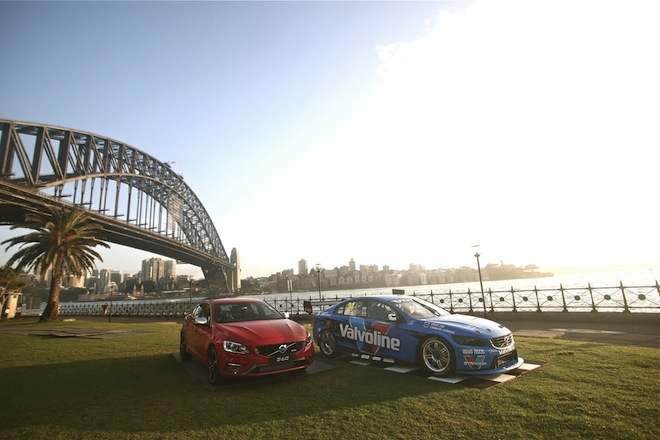 The S60 race car with its road car brethren

Next Story Tekno confirms Hallam and one-car for 2014