Tekno confirms Hallam and one-car for 2014 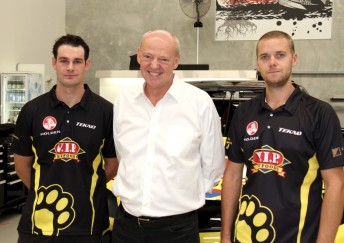 Tekno Autosports has signed former Walkinshaw team principal Steve Hallam while confirming it will only run a single-car operation in the V8 Supercars Championship.

Hallam has commenced duties as the general manager of the Gold Coast-based squad which has confirmed it has retained major backer VIP Petfoods for the Commodore which will be driven by team incumbent Shane Van Gisbergen.

Tekno had been working on a possible tie up with the Tony D’Alberto REC serviced by the team as a second car however that option now appears to have been abandoned.

Hallam arrives after the team sacked former manager Bruce Jenkins who was suspended from the squad for unspecified allegations since October.

“Steve has a wealth of international experience, and the way HRT improved under his direction showed his capabilities,” Webb said.

“Steve’s personality, professionalism and leadership skills ensure he will be a highly-valued member of our close-knit family team.”

Webb confirmed that he will link with Van Gisbergen in the three-race Pirtek Enduro Cup after his proposed enduro deal with the Holden Racing Team was blocked.