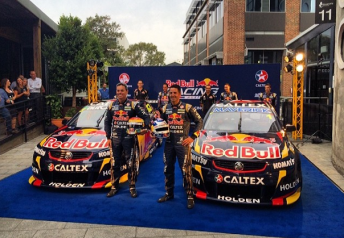 Lowndes and Whincup with the Red Bull Holdens

Red Bull Racing Australia is the latest team to show-off its new-look V8 Supercar livery ahead of this weekend’s pre-season test.

The team took the covers off its Jamie Whincup and Craig Lowndes driven entries in Sydney this evening.

Dumbrell has been contracted for a third season and has added a Dunlop Series campaign with customer outfit Eggleston Motorsport to his schedule. Last year saw Whincup lead the team to a one-two championship finish for the third time in succession.

The five-time champion is again expecting Lowndes to be his biggest threat.

“Craig’s strong every year and he’s just come off of his big win at the Bathurst 12 Hour,” he said.

“He’s solid as a rock and no doubt he’ll be a big threat this year for the championship.

“I’m hoping and predicting that he’ll be my main man to beat.”

See below for V8 Supercars’ video from the launch