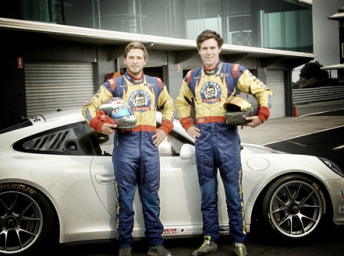 After finishing third in the Australian Formula 3 Championship behind Tim Macrow last year, Foster is back in the series where he earned the Carrera Cup rookie of the year title in the 2012 series.

“This is a beautiful car to drive. The new car is just a step above anything before it.

“It’s gone from being a road car derivative to something more like a TT car. It’s a gorgeous car to drive.”

“Everything about this car is fantastic. From the paddle shifter to the way it grabs the road to the way it accelerates. It’s a dream to drive. What a fantastic way to celebrate your birthday (he turned 23 today).”

Foster and McBride spent much of the test session shaking down the new cars, before concentrating on some quicker laps towards the end.

Elite racer Adrian Mastronardo returns to the wheel of a racecar for the first time in over 22 years.

“I have four boys, the eldest of whom is 10 years old. They’ve all shown a bit of an interest in racing so I really want to light the candle and show them the path,” he said.