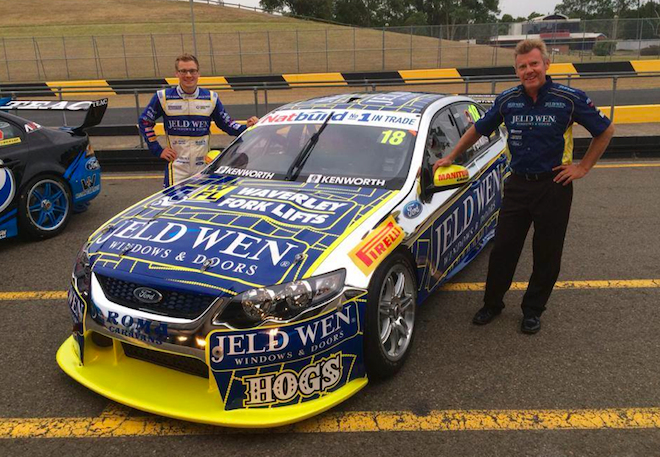 Perkins and Schwerkolt with the new Jeld-Wen Ford

Jack Perkins has set his sights on lifting the Jeld-Wen Ford into the top 10 as he prepares for a return to the V8 Supercars Championship for the first time in six years.

Perkins joined the Ford Performance Racing squad, under which his #18 car is garaged in a satellite arrangement, for a full scale fitness camp north of Auckland recently in preparation for his year.

“There’s no reason why we can’t get into the top 10 this year,” Perkins told Speedcafe.com.

“Talk is cheap and I guess the easy bit is, I’ve got the drive. I feel as though I am driving as good as if not better than I ever have.

“I’ve just grabbed the opportunity with open arms and I will make the most of it.”

Perkins says he has been training twice a day, seven days a week to be fully prepared for his return to the main V8 series.

He has admitted it has been easier to be motivated in the off-season knowing he has a one-year contract with an option to extend with Charlie Schwerkolt’s Racing Entitlements Contract.

“To be able to enjoy Christmas with my family and knowing that I’ve got a full-time drive at one of the best teams is a relief,” he said.

“I’ve always prided myself on having a good level of physical fitness and each time Christmas has rolled around in previous years it has been pretty disappointing because I haven’t had anything in place full time or even co-driver wise.

“We ran up the Rangitoto Volcano on the island north of Auckland. We did bike rides over 150km, some kayaking, strength sessions with the New Zealand Olympic weightlifting champ, and a few other boxing sessions in the gym.

“No other team I’ve been involved with does anything to that level so that was really cool to be a part of.”

Perkins believes FPR will give him the equipment to race the squad’s incumbents Mark Winterbottom, David Reynolds and incoming Chaz Mostert on an equal footing.

“The team and the car will give me the equipment to at least match my team-mates which will be the first yardstick to be able to get an idea on where we sit with them,” he said.

“I’ve been spending as much time at the workshop as I can to become familiar with the team and getting comfortable in the car.”